The World of Boxing!

Tyson was well known for his ferocious and intimidating boxing style as well as his controversial behavior inside and outside the ring. Nicknamed "Iron" and "Kid Dynamite" in his early career, and later known as "The Baddest Man on the Planet", Tyson is considered one of the best heavyweights of all time. Tyson holds the 3rd longest unified championship reign in heavyweight history at 8 consecutive defenses. He currently ranks #15 in BoxRec's ranking of the greatest heavyweight boxers in history. He was ranked No. 16 on The Ring's list of 100 greatest punchers of all time, and No. 1 in the ESPN.com list of "The Hardest Hitters in Heavyweight History". Sky Sports rated him as "the scariest boxer ever" and described him as "perhaps the most ferocious fighter to step into a professional ring". He has been inducted into the International Boxing Hall of Fame and the World Boxing Hall of Fame.

Music by: Sirius Beat - My Story 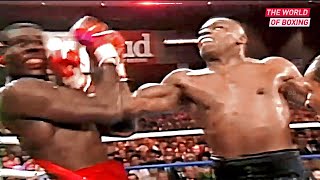 Top 20 Punches That Will Never Be Forgotten - Pt1

The Fastest Knockouts in Boxing History!